The BioLight Toxy luminometer offers the most up to date dual option instrument  for bioluminescent toxicty testing with Aliivibrio fischeri (formerly named Vibrio fischeri) in the market.  This is a result of matching a team of experts in ecotoxicity to fulfill the needs of toxicity users around the world.

This state-of-the-art luminometer brings together the capabilities of doing portable testing in the field as well as bench top testing in the lab.  The BioLight Toxy all-in-one unit is designed to be used in conjuction with the BioLight Multi and Single Reagent as well as BioLight Recon, BioLight Diluent and BioLight Salinity Adjusting Solution.

◊  Versatile  modular bench-top and portable reader in one

◊  Expandable  bench-top offers up to 2 cooling block per unit

◊  Independent  no need of tablet or PC

◊  Value  most cost-effective offering in the industry

Aliivibrio fischeri  (formerly Vibrio fischeri ) is a marine, Gram negative and non-pathogen bacterium that luminesces as a natural part of its metabolism under optimal environmental conditions.

When exposed to a toxic substance, the metabolic respiratory process of this bioluminescent bacterium is disrupted, reducing light output.  This inhibition of luminescence by Aliivibrio fischeri can be measured after 5-30 minutes with a photometer (luminometer).
The reduction of light intensity measured, directly correlates with the degree of toxicity of the sample relative to the control sample.

The application of freeze-dried luminescent bacteria proves to be a useful tool for the assessment and monitoring of toxicity.
Using the BioLight Toxy along with the BioLight Reagents and consumables provides testing that screen over 3.600 chemical compounds simultaneously.

The BioLight Toxy – Bench Top instrument includes a cooled read well and cooled reagent well along with a separate cooling block to ensure all samples are kept at the appropriate temperatures during testing.  There is an option to add an additional cooling block to double the number of samples that can be tested (up to 60 samples).

When using the BioLight Toxy – Bench Top, there will be multiple protocols available to choose in the onboard software.  The software is easy to use and provides all results calculations that can be printed or uploaded to a computer as well as saved in the software. Choosing a protocol will be based on the water type, expected toxicity level and results of the baseline data if available. Most protocols provide results in approximately 45 minutes, including the 15 minutes for the BioLight Multi reagent to equilibrate after reconstitution.

When using the BioLight Toxy in the field, two standard protocols are set up in the onboard software, the Primary Test and the Quick Test. This testing requires the BioLight Single Test Reagent, BioLight Diluent, BioLight Salinity Adjusting Solution and disposable glass cuvettes.

The BioLight Toxy field portable mode does not include temperature control, so it is important to keep the reagent frozen until use. Each vial of Single reagent will do up to 3 tests. Typically, this will be a negative and positive control and 1 sample. To start, sample tubes are set up in a cuvette rack based on the number to be analyzed. Following the protocol in the instrument, the reagent will be prepared and will require a 15-minute wait time to equilibrate. Step by step instructions will be provided in the software protocol for sample prep and reading. The BioLight Toxy will read the Single reagent at time zero to have a baseline to compare the readings after sample exposure. The instrument can be set for custom read times, however the typical field read time is 5 minutes.

This test will provide results in 20 minutes total. The Toxy can be set to read again at 15 minutes if required to see if there is a significant difference in the light loss. Different chemicals often have effects on the light change at different times. Light loss may be present at 5 minutes but may continue to decrease at 15 minutes. The 15-minute reading may be more reliable.

User can either choose from a library of common toxicity tests already pre-programmed in the software or create a fully customized test that can be saved to the library for future testing. This is just one of many helpful features that have been incorporated into this new state-of-the art luminometer, making rapid acute toxicity testing even easier.

Software is multilanguage and friendly for new users. 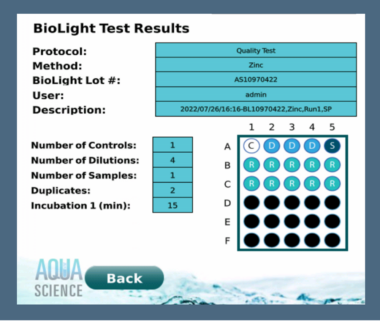 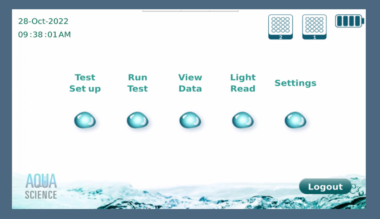 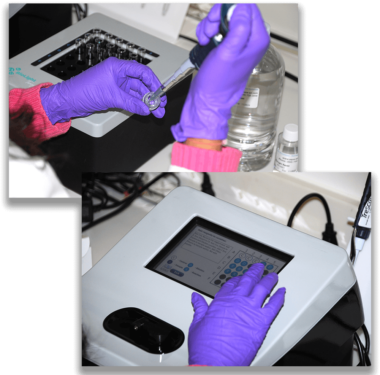 Testing using a single concentration.  This test will not determine relative toxicity or provide a dose response curve.

Used to compare the relative acute toxicity of an undetermined sample with a control sample. A control sample could be a sample of a determined toxicity.  This is the best test for the analysis of low toxicity samples if the EC50 values can’t be achieved using the EC50 test.

Complies with ISO 11348-3. The ISO Standard states that the method is applicable for wastewater, fresh water – both surface and ground, sea and also brackish water, eluates of sediments, pore water – both aqueous extracts and leachates.

Used for soils, sediments and other solid samples. The test uses solid samples which are serial diluted with 9.9% being the highest concentration. It can be used for freshwater, marine and estuarine samples with the appropriate diluent. It allows for the detection of toxicity due to the insoluble solids that are not in solution by allowing the test organisms to come in direct contact with the solid sample in an aqueous suspension.